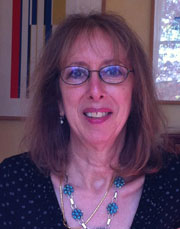 Diane Sherman obtained her BS at Temple University in Philadelphia and her PhD at Edinburgh University. She is currently in the Centre for Neuroregeneration at the University of Edinburgh Medical School. Her primary contributions have been in two areas. First she showed that the Neurofascin gene was essential for the assembly of the node of Ranvier in the PNS (Sherman et al., 2005. Neuron 48: 737-742). Secondly she discovered the Periaxin-DRP2-Dystroglycan complex that forms Cajal bands in Schwann cells and that mutations in the Periaxin gene cause defective elongation of Schwann cells (Sherman et al., 2001. Neuron 30: 677-687). She also generated mouse chimeras which demonstrated that such deficits were Schwann cell autonomous. This led to the first experimental demonstration of the prediction of Huxley and Stämpfli (1949) that conduction velocities should increase asthe distance between nodes grow up to a “flat maximum”.