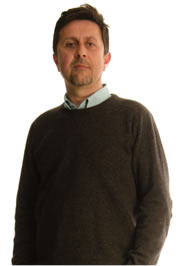 Hugo Cabedo received the medical degree from the University of Valencia  (Spain) and the PhD from the  “Instituto de Investigaciones Citológicas” in the same city. As a visiting scientist at the laboratory of Professor WD Richardson in UCL (UK), he was introduced in the use of mouse transgenesis as a tool for in vivo exploring myelin biology and pathology. Currently Hugo Cabedo works for the University General Hospital and runs a lab at the Institute for Neuroscience in Alicante (Spain). His group is interested in the molecular mechanisms of axon-glial signalling at the peripheral nervous system. Recently they have shown that axonal over-expression of the NRG1 type III ?3 increases Schwann cell proliferation and generate neurofibroma-like structures. Schwann cell proliferation in these tumours is spontaneously blocked by the induction of the Ink4a/Arf locus, a mechanism that they have shown is as well activated to control proliferation after PNS lesions.  Currently his group is exploring the epigenetic mechanisms that regulate c-jun expression in Schwann cells after nerve injury.